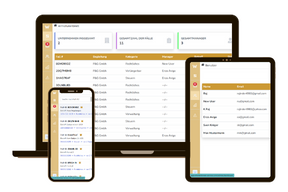 The Whistleblower application has been developed so as to keep track of what’s going wrong within an organization. The application carefully checks whether the facts are consistent before reporting a case.
The app contains an exclusive triage connection pattern that connects all the stakeholders within the organization. The main feature of the whistleblower app is that it has easy steps for registration for a new complaint. Users can also register a new complaint under any of the many categories defined by the organization.

Only the Director, Manager, and Admin have been given access to see information registered by the users. Confidentiality of the case is maintained here and the name of the person who is reporting the case is not disclosed. A few of the security features that have been put into use are Custom Captcha, Encrypted Text, Encrypted Audio Recordings along with an Encrypted database. The user can log in using his/her application ID to view the status of the case.

Our expertise in this app has been to develop a connection pattern that links all the stakeholders within the organization. We have built-in features where the whistleblower is allowed to lock his complaints in a discreet way. The security features have been programmed in such a way that none of the audio recorded complaints & encrypted the complaints of the whistleblower.

The whistleblower has an opportunity to track his complaint as & when there are any changes registered. The workflow has been built in for the whistleblower to re-register his complaint, this complaint later gets transferred to a different manager to help resolve the same. A few of the security features that have been proposed are Custom Captcha, Encrypted Text, Encrypted Audio Recordings along with an Encrypted database.

We have used Adobe XD and Photoshop to build the Wireframes and Front End designs. These were used for both the initial design/mockup slides and were implemented in the design revisions also.

Since Technology Stack undergoes constant changes (due to upgrades in web and mobile technologies), we performed a comprehensive Test Strategy. Our testing included exhaustive functional and non-functional testing, manual and automation testing besides performance and security testing.
Our automated application testing and performance analysis ensured that the applications were tested on multiple devices and form factors. This also ensured that the testing process was made quick, efficient, reliable, and repeatable.

We are glad that you preferred to contact us. Please fill in your requirements and one of our friendly team members will contact you back.